Home  Company  About us

The glove specialist Reusch is a worldwide operating company with more than 85 years of experience in manufacturing high-quality sports gloves and equipment. Specialized on goalkeeper gloves and winter sports gloves, Reusch is one of the world’s leading traditional glove brands.

Founded in 1934, Reusch pursues a clear goal: the development of the best gloves, consisting of high-quality materials, innovative technologies and an outstanding fit. The expertise of Reusch as a glove specialist is not only defined by knowledge and skills, but also by tradition and experience. These core competencies guarantee that every Reusch glove delivers what it promises.

Extensive knowledge of materials, thourough quality control, trustful cooperation with professional athletes, and the collaboration with reliable partners ensure that every Reusch collection is developed with the highest level of expertise.

HOW IT STARTED
In 1934, Karl Reusch manufactured his first pair of gloves in the attic of his home. After developing and improving glove engineering for decades, in 1972 the needs of professional alpine athletes were finally met. Together with his son Gebhard, Reusch entered the industry with a collection of specially designed winter gloves and started expanding its market activities. One year later, in close cooperation with the German goalkeeper legend Sepp Maier, Gebhard Reusch developed the first goalkeeper glove in history. A milestone for the world of soccer and Sepp Maier as well, who won the World Cup just one year later.

HOW IT CONTINUED
Since 1972, alpine athletes wearing Reusch gloves have conquered 75% of all available medals at major alpine skiing competitions, ranging from Ski World Cups to the Winter Olympics. Since 1974, many goalkeepers in the first national divisions all over the world have trusted in Reusch Goalkeeper Gloves, bringing home six World Championships, six European Championships, three Copa America, and many more.
After celebrating Rausch’s 70th anniversary in 2004, Reusch got back to its roots and has been concentrating on what it knows best ever since: delivering professional alpine and soccer gloves for amateurs and professionals.
Reusch – BE THE ONE! 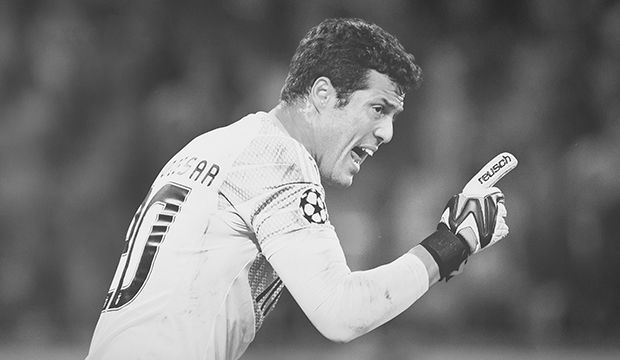 The first goalkeeper that had ever been sponsored by Reusch was Sepp Maier at the Football World Cup 1974 in Germany. Over the years Reusch supported many international top-goalkeepers such as the World Cup winners Ubaldo Fillol (ARG, 1978), Nery Pumpido (ARG, 1986), Bodo Illgner (GER, 1990), Claudio Taffarel (BRA, 1994) and Marcos Reis (BRA, 2002). With Dida from AC Milan (2002/03, 2006/07) and Júlio César from Inter Milan, Reusch goalkeepers have won three UEFA Champions League titles since 2002.

In the Alpine ski sector Reusch collaborates with some of the world’s most successful athletes ever, such as Mikaela Shiffrin, Petra Vhlova, Henrik Kristoffersen, Alexis Pinturault, Marco Odermatt and Marco Schwarz. Additionally Reusch is the official supplier of seven of the world's most successful ski federations (Austria, Switzerland, France, USA, Norway, Liechtenstein, Slovenia). Moreover, numerous renowned athletes of other disciplines trust in Reusch, such as freeride-icon Jérémie Heitz.

Learn about your career at Reusch and see open job offers.

Find your Reusch dealer near you with our dealer search.

Find Reusch distributors all over the world.